Package ui is a user interface toolkit for Go that targets desktop applications (SDL2, for Linux, MacOS and Windows) as well as web browsers (WebAssembly rendering to an HTML Canvas). 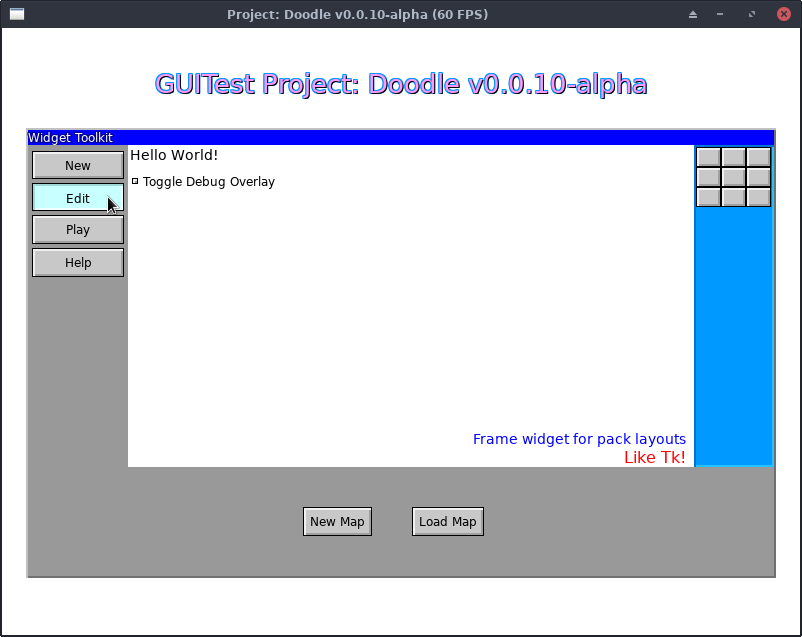 It is very much a work in progress and it's a bit buggy. See the Known Issues at the bottom of this document.

This library is being developed in conjunction with my drawing-based maze game, Project: Doodle. The rendering engine library is at go/render which provides the SDL2 and Canvas back-ends. (GitHub mirror: kirsle/render)

Notice: the canonical source repository for this project is at git.kirsle.net/go/ui with a mirror available on GitHub at kirsle/ui. Issues and pull requests are accepted on GitHub.

The following widgets have been implemented or are planned for the future.

Widgets are designed to be composable, making use of pre-existing widgets to create more complex ones. The widgets here are ordered from simplest to most complex.

Some widgets that support user interaction (such as Button, CheckButton and Checkbox) need to be added to the Supervisor which watches over them and communicates events that they're interested in.

You only need one Supervisor instance per UI. Add() each interactive widget to it, and call its Loop() method in your main loop so it can update the state of the widgets under its care.

The MainWindow includes its own Supervisor, see below.

The MainWindow widget may be used for "simple" UI applications where all you want is a GUI and you don't want to manage your own SDL2 (or Canvas) engine.

MainWindow is only to be used one time per application, and it sets up its own SDL2 render context and creates the main window. It also contains a Frame widget for the window contents and you may Pack() widgets into the window the same as you would a Frame.

MainWindow includes its own Supervisor: just call the .Add(Widget) method to add interactive widgets to the supervisor. The MainLoop() of the window calls Supervisor.Loop() automatically.

The frame packing algorithm (frame_pack.go) is currently very buggy and in need of a re-write. Some examples of issues with it:

It's on my to-do list to rewrite the algorithm from scratch and make it more resilient. One thing I also want to do is rename the Anchor field and call it Side to be more in line with the Tk GUI toolkit's naming convention. ("Side: N" or "Side: SE", and let the "Anchor" name be used for how to center the widget inside of its space ("Top", "Center", "Left", etc.)